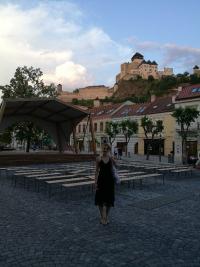 "I just came back from my 5-months Erasmus Mobility in Trenčin. I chose Trenčin to get to visit and know better Eastern European Countries. When I left, I was scared. No one at my University ever went on exchange there before… I felt like a pioneer. Most of my friends are still convinced that I was in Slovenia or the Czech Republic. No surprise… for many people, Slovakia only exists on the map, if any. What a mistake!
Admittedly, the first month was quite hard: I was in a dorm, in the hamlet of Zablatie, twenty minutes by bus from the city center and the University. Nobody spoke English, there was no supermarket nearby… I found myself in the middle of nowhere. But I wasn’t discouraged: with the valuable help of the University’s staff, I found a flat in the city center, shared with four Slovak girls.
Since then everything changed. So, here is my first tip: If you will go to Trenčin on Erasmus look for a shared flat! Thanks to my roommates, I improved my English and learned about Slovak food, their traditions, their routine… quite different from “ours”, but worth a try! I met so many people. Little by little, even the Slovak language, so hard and difficult to understand, was no longer an insurmountable obstacle, granted that I wasn’t really able to understand everything…
In two months, I was thus able to adapt and I was ready to go visit Slovakia and neighboring Countries. Indeed, this small European State is very well located: Vienna, for example, is only one hour by bus from Bratislava! In five months, I went to some nine different states, as well as many Slovak towns.
Slovakia is a beautiful country, very rich in nature. Economically it is less advantaged than Italy but very rich in humanity. The good side of it is that the cost of living is very low if compared to Italy, which makes traveling very affordable. Slovakia is also called "the country of castles", guess why? Most towns have a castle that tells their own story.
In Trenčin you can find everything you are looking for: it has a modern University, with a gym, a bar, a canteen, a library, some study rooms and much more in. Erasmus students benefit (just like “local” students) from the ISIC card, that gives a lot of advantages, including travelling by train for free all around the country!!
The Erasmus office staff was kind and helpful: all the documents were timely delivered, which eases a lot the life of foreign students. Moreover, all my classes were taught in English, and when there were students speaking only Slovak, we had mixed lessons in both languages.
Trenčin is a very nice town. Its castle, a symbol of the city, hosts were many important events. The Vah river runs all over the city and you can easily move around by bike or even walk. Along the river, you can find outdoor gyms, ice rinks during the winter, kayaks and a water park during the the summer, festivals, bars and some restaurants serving the famous local beers. Ah… don’t forget to try culinary combinations that will give you immediately goose bumps, you will certainly laugh about it later.
Last tip: a hockey match at the local stadium is a must: a low-cost experience that you will never forget. I actually became a huge fan of the local team, the Dukla, through their path to the final!
So, dear fellow students, don’t be scared of the unknown: Slovakia will amaze and enrich you. It will be etched on your heart with its castles, its festivals, the bars paying attention to details and its people.
Travelling opens up your mind, and Slovakia for me has been a leap into the void that I would definitely repeat a thousand times again. There, I found much more than I would have ever expected, and, you can bet, I’ll be back one day".